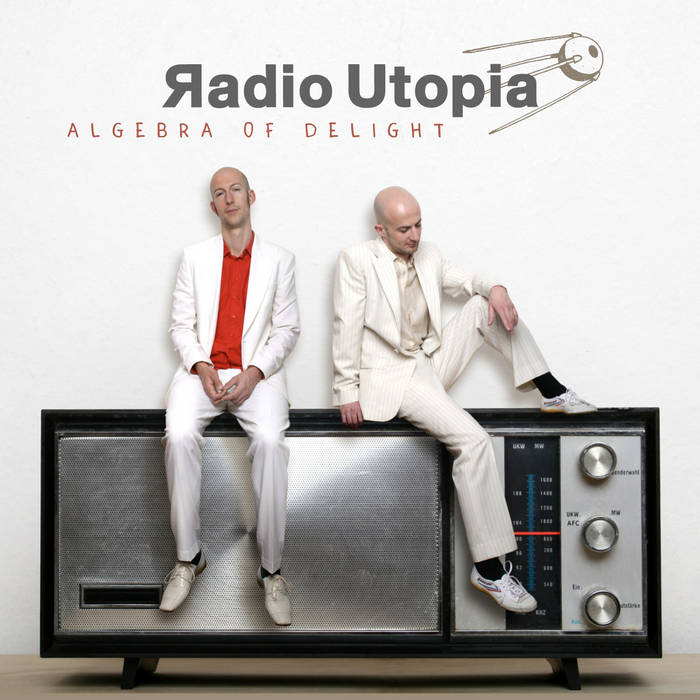 RADIO UTOPIA – Music for outer space? (spoiler)
The RADIO UTOPIA CD, on which your hands lay on, is actually just a by-product. If you believe in what the critics say, the distribution of physical CD’s is no option for the future. CD- lovers raise their voices powerful against this statement. But what does the future hold for the music industry? Most people traditionally say: the future lies in the outer space, by investigating strange new worlds. Some top-ranking-scientists from the Soviet Union detected already in the sixties that this development will take a long time. The scientists were not willing to wait any longer, so
they decided to fire a satellite into the orbit in order to broadcast non-stop music and lyrics into the universe (primary the content was probative for the cultural superiority of the Soviet Union; thus Lenin-quotations, real-socialistic poems, revolutionary slogans, etc).

By a fluke RADIO UTOPIA became owner of this satellite and hold that an update was necessary. But what should be broadcast in order to give the aliens an understanding for our culture?

It is easy to suspect: the vision of an ideal radio station, which self-explanatory plays only the most beautiful music. At least this is the biggest wish of artists like JERKER KLUGE and DANIEL REGENBERG and due to this crucial fact the new album Algebra Of Delight was recorded

Jerker is well known as a profiled jazz bass-player in the Munich jazz & funk scene and takes part in the recordings, compositions and live performances of The Hi-Fly Orchestra, The Boogoos, Hipnosis and Cesar•s Salad, just to name a few. Together with his brother Daniel, who lives in Berlin and also does music for theatre and film productions, he formed RADIO UTOPIA.

Daniel is also working as a film-director and invented the first german internet-sitcom „Torstrasse-Intim“ (www.torstrasse-intim.de). Together they also produced the first solo-album of singer Bajka („Bajka in Wonderland“), that will be released in 2010.
After dozens of projects and many releases in the field of "real jazz",
the two jazz musicians decided, to join forces for a sample-based Disco-Funk-HipHop- House-Afrobeat influenced club-music-album. (For those, who think this sounds a bit nerdy: you can also call it pop-music...)
The album convinces with excellent ideas realized on a very high production standard.

The use of many samples from traditional African music besides jazz, funk and soul adds a special organic warmth, that is seldom found in electronic or produced music. The producer ́s rich jazz-background always shines through in all the compositions and lets them grow with every listening.

The diversity of the album in terms of „genre“ takes listeners on a joyful surprise tour, and this is what the artists hope and imagine, how radio in an ideal world could sound like.

-Yelena who is, besides her affinity for pop music, a remarkable jazz singer and will release her first album as a leader in 2010.

-Maria Kamutzki who sung & composed the well known song „You`ll be mine“ for the German Ebay TV Campaign back in 2007.

Bonobo stops by to talk about his new record Fragments