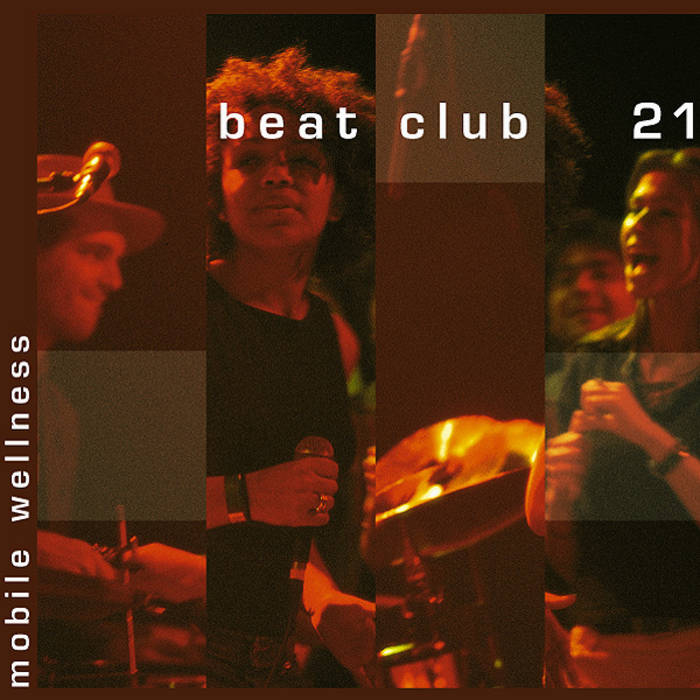 It began with the beat. And a small four-man ensemble which in about summer 1999 not only began to fill the breaks between DJ sets with live sounds, but in doing so expanded the limits of dance floor by adding an extremely lively component. Percussionist Tilman Bruno, bassist Christian Spohn, drummer Philipp Rittmansberger and keyboarder William Veder’s answer to the digital, usually purely reproductive club sound was an acoustic intermezzo in which the beat still plays the central and energy-providing part but which particularly emphasises the interaction with the audience and “live feeling”. From this mere rhythm section evolved a passion of genuinely artistic dimensions and the spark was created which finally led to BeatClub 21.

Anyone who is not in on the secret and associates the name BeatClub21 with Beatle haircuts, guitars and sixties feeling, is utterly wrong. The name demands a literal interpretation and is in fact derived from the “club-beats” which are the stylistic backbone of the band – often a driving, self-escalating set of intertwined drum and percussion beats - or “cogwheel-grooves” as the band itself describes it. These are the club beats of the modern age, sometimes progressing continuously as is familiar from house music, sometimes broken to cascade into complex breaks, also showing the edgy but irresistibly danceable patterns of drum&bass or UK garage. In short, they are the club sounds of the 21st century – which is where the number 21 in BeatClub21 comes from. Of course, the mystery is not yet completely solved, however: it is only totally revealed at a concert given by these exceptional musicians.

Of course, the four founding members around Tilman Bruno still perform purely as a rhythm quartet in smaller clubs, but over recent years the concept has expanded into a nine-man (!) band whose musical output has now gone far beyond what once began as a live treat for the floor. It is probably jazz that has the greatest influence on the sound of BeatClub21 - to be heard in many phases which edge their way into the distinctive grooves, and it spreads sometimes broadly, sometimes sharply across the infectious rhythmical concept, expanding the group’s purely percussive approach with the addition of numerous timbres and harmonies. The initially often minimalist spectrum of William Veder’s warm-sounding Fender Rhodes finds its congenial characteristic extension in wind solos by Volker Degelmann (trumpet) and Gary Fuhrmann (saxophone); Claus Kießelbac’s vibraphone consistently plays the role of the sensitive musical intermediary between rhythm and melody. Two fixed stars in the universe of Beatclub21 are to be found in Fola Dada and Nathalie Schäfer who significantly help shape the now unmistakable sound of this hyper-modern “big band” with their voices and their charisma. Their singing is equally skilled in soul, jazz and pop and they compress many an artistic idea into powerfully expressive and exceedingly sensual moments in which harmony, jazzy playfulness and grooves are condensed into an exhilarating concentrate.

Several times a year a castle in Mittelhessen, Germany acts as an artistic refuge and creative source, a rehearsal room and friends’ meeting place in which new pieces are rehearsed, a lively exchange of ideas between the members of the band takes place and productions are prepared such as the debut album on the label INFRACom! due for release in early summer 2003. In this way, Tilman Bruno and Christian Spohn - who now concentrate more on production - are trying not to succumb to the temptation of perfectionism and modern studio technology because even on a studio album the musical energy of BeatClub21 should derive from the skill of the instrumentalists and vocalists and not from samples. Precisely this elemental character is what makes their sound so unmistakable.

That is also why interaction with the audience is so crucial, perhaps even the true artistic force behind BeatClub21. After all “there’s nothing better than the feeling that you’re sweeping people along with you from the stage” as singer Nathalie puts it - an effect anybody will know who has been to a concert by this band before. Their music is not the result of a carefully conceived project but of an artistic longing; the likable troupe seem happily to lack a straining intellectual superstructure. Instead we have professional musicians who have not lost the ability to celebrate music and rhythm for its own sake, who elate us with their grooving sounds and create something that sadly is not that common in so-called “Nu-Jazz” anymore: the magic that comes from ability and passion. Welcome to BeatClub21!